Douglas Todd: Who cares about ‘winning’ the immigration debate?


Not many Canadians are extremists, either for or against current immigration policy or rates. The bulk of the population seems hazy about Trudeau’s plan to continue to increase immigration levels to 350,000 a year.

Politicians and corporations that want more immigrants in Canada are mounting marketing campaigns to “win the immigration conversation.”

At least the CEOs, think tanks and civil servants are upfront about aiming to promote higher immigration levels, which aligns them with Prime Minister Justin Trudeau and the Liberals.

Where, however, does this leave all the Canadians in the mushy middle? That’s where most Canadians are at, according to immigration department officials and other migration experts who spoke at a Conference Board of Canada event held last week in Vancouver. The gathering was titled, “Winning the Immigration Conversation.”

Not many Canadians are extremists, either for or against current immigration policy or rates, polls suggest. The bulk of the population seems hazy about Trudeau’s plan to continue to increase immigration levels to 350,000 people a year by 2021, up from 260,000 when he was elected in 2015.

My sense is most Canadians are not eager to either “win” or “lose” the immigration discussion. Most of us don’t think immigration boils down to an either/or option. Some of us mostly want to know what’s going on, so we can be informed at the ballot box.

But as some speakers at the Conference Board event noted, Canada’s politicians and mandarins are almost unique in the obscure way they dictate the country’s powerful immigration policies from behind closed doors.

Kareem El-Assal, the senior immigration director for the Conference Board, asked me to speak at the “Winning the Immigration Conservation” conference so participants would not end up in the usual echo chamber, in which everyone basically agrees with each other.

El-Assal had seen my 2017 story on the clubby atmosphere that reigned among the more than 1,000 Canadians who work with immigrants, refugees and international students and attended Montreal’s Metropolis Conference. My article on that gathering was headlined, “The narrow view from the migration sector bubble.”

So I give credit to the corporate-sponsored Conference Board, a booster of high immigration levels, for welcoming diversity of opinion. It turned out some scholars, and even some civil servants, had their own skepticism about Canada’s immigration levels, which are arguably the highest per capita in the world.

I told participants I’m intrigued by philosophy’s two foundational questions: What is real? And how then shall we live? And I bring those questions to immigration matters.

What I’ve discovered in recent years on the migration beat is the vast majority of native Canadians (and to a lesser extent immigrants) don’t have a grasp on what is real about the increasing global migration of people, particularly into Canada. And it’s understandable.

Even though the Conference Board has launched its own campaign for increased immigration, El-Assal revealed data showing most Canadians don’t have the foggiest idea about a basic issue: How many immigrants come into Canada each year.

Only nine per cent of Canadians knew correctly it is between 150,000 and 300,000 annually. What’s worse, El-Assal said, when Canadians learn how many immigrants are actually entering the country, their support goes down.

“The populists may have a point,” Antje Ellerman, a political scientist at UBC, told the Conference Board gathering.

“Canada has a high degree of (immigration) policy-making behind closed doors.” The immigration agenda has “traditionally been dominated by the government and civil servants, and rarely engaged the public in meaningful ways.”

In addition, the complexities of immigration rules are not often covered by the media. That is the unfortunate case even though, for instance, almost half the populations of Toronto and Vancouver are foreign-born.

One concern is that if Canadians are purposely being kept in the dark about immigration developments, and even opposition politicians are afraid of raising the subject for fear of being labelled xenophobic or racist, how can the host society make wise choices about an issue that has defined the country?

Turns out many Canadians are concerned. Only 45 per cent believe immigration is “good for the economy,” according to a new Ipsos poll. Another 57 per cent believe “immigrants place too much pressure on public services,” be that health or transit systems. And almost 60 per cent say government is “hiding the true costs to taxpayers and society.” 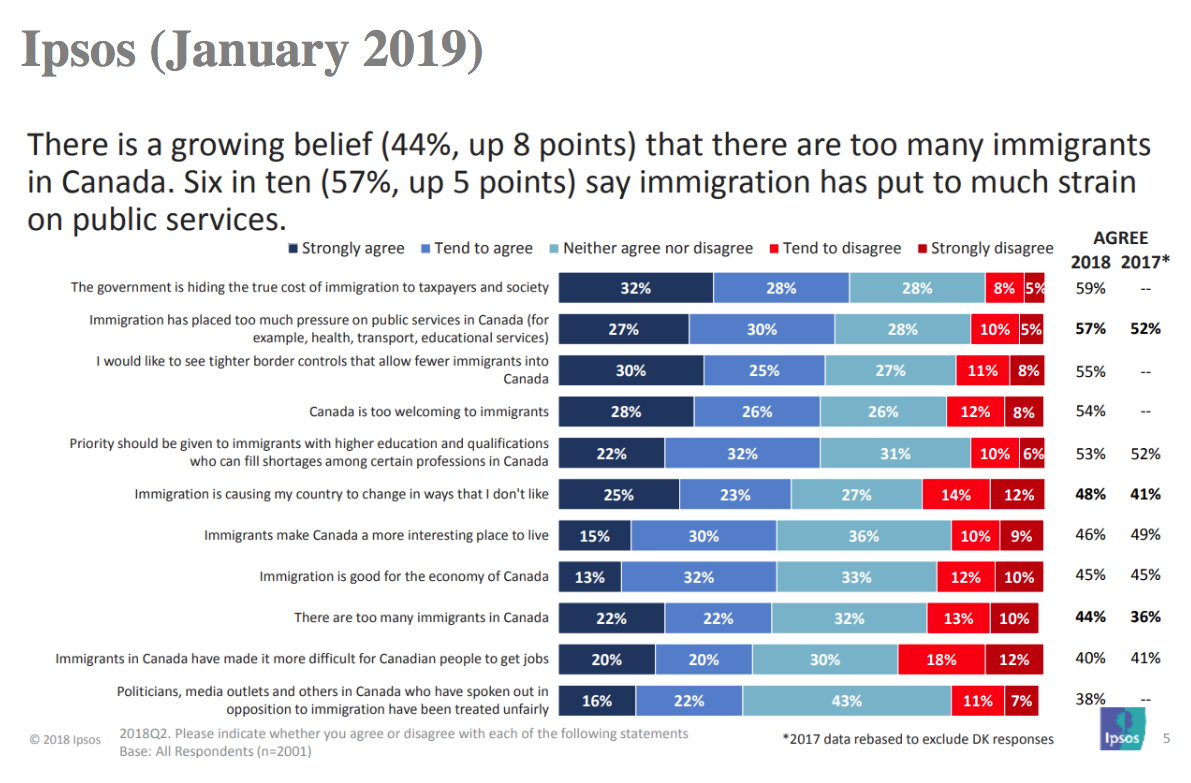 Immigration officials are not alone in finding in the past couple of years that there has been a shift among Canadians about immigration. That is part of the reason Ottawa has launched a promotional campaign called #immigrationmatters.

Its public relations effort is getting out stories about immigration successes, especially at the neighbourhood level. Not a discouraging word will be heard from #immigrationmatters, of course, since it will support a major plank in this year’s Liberal campaign.

However, Ellerman is among those who think it unwise for governments in Canada, Europe or elsewhere to ignore the populist voices that worry about immigration. To do so, she said, could feed anti-immigration radicalism.

One finding takes issue with frequent claims by Immigration Minister Ahmed Hussen that high immigration is the key to economic prosperity. Green highlighted how immigration has an almost imperceptible effect on long-term Canadian wages, not doing anything at all for per-capita income.

And although boosters of strong immigration frequently maintain it is absolutely necessary to counteract an aging Canadian labour force, Green’s studies show its effect is minimal, almost non-existent.

Immigration numbers would have to jump multiple times over to make even a small dent in the growing portion of seniors in Canada, Green said. In addition, many people who obtain citizenship status in Canada soon try to sponsor older family members to join them.

But immigration is not all about economics. Many of the speakers recognized reliable new opinion surveys show much of the public resistance to high immigration has mostly to do with culture.

Roughly one in two Canadians fear too many immigrants “do not adopt Canadian values.” Many in the host society feel they are losing command of their own cultural identities. Some migration specialists said such feelings should not necessarily be dismissed as xenophobic.

Give the swirl of powerful factors at play, what are we to make of efforts by Ottawa and its supporters to “win the immigration conversation”? Even though organizers of the Conference Board event said they came up with the title to be provocative, I’d say immigration policy needs more balanced attention than that found in win-lose campaigns.

In a democracy, the public could use as much information as possible about migration policy and trends. Who knows what would happen if Ottawa became more transparent? Reality has a funny way of surprising all of us.